My previous attempts at level design have had some major commonalities: they were both 3D, first-person, and single-player. And while there are certain elements of design philosophy that can carry over, making a stage for the multiplayer Super PAC Bros! is something that’s entirely new for me. So before I jump in head-first, let’s take a look at what the collective influences of the game (Towerfall, Duck Game, Super Smash Bros.) do with their levels.

A big experience that these games offered was that of players pursuing each other around a map, a chase that could be reversed at any time. Maneuverability was important, which lead to a revelation that should have been obvious: All of these games minimized dead ends.

A diagram of a level from Duck Game, with paths labeled in red

Because of these games wanting a constant flow of motion, circular and rectangular motifs appear in their geometry. Quite often, these stages have bottomless pits in order to kill the player; however, this won’t be compatible with Super PAC Bros!, since no “lives” system or economy exists in the game. 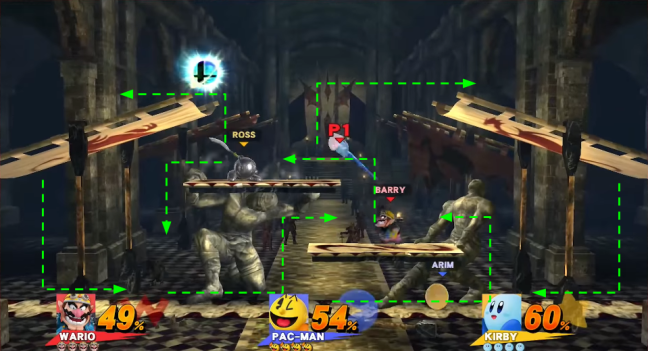 A diagram of a level from Super Smash Bros. U, with paths labeled in green. Note that players can drop through the banner platforms near the top

Though Towerfall has player lives, it uses screen-wrapping to eliminate bottomless pits, making killing another player the only way to succeed. This decision also benefits the game’s sense of motion, encouraging players to keep moving, and presenting this as a possible strategic tool.

A diagram of a level from Towerfall, with paths labeled in green, and screen-wrapping points in red circles

Another common tactic employed by these games are having mechanics and systems specific to certain maps. These are often built into the setting of a level, and allow the player to have an effect on the environment and their opponents. This is a strategy that’s employed by single-player games as well, though more time is available to introduce the mechanic. In multiplayer games, the results of these elements need to be introduced as side-effects of the players’ normal actions, since they will be too busy fighting each other in order to puzzle it out.

Players’ attacks in the Luigi’s Mansion map of Super Smash Bros. Wii U causes the environment to collapse, eliminating platforms

Teleporters are present in some levels of Duck Game. Note that the player is able to both move and shoot through them

Something that my roommate, a fellow designer, had noted to me was that fighting games had a hard time of preventing players from avoiding fighting while their rivals picked each other off first. If someone playing the game only had to deal with killing one opponent instead of three, then why shouldn’t they hang back and let the difficulty be mitigated for them? To help compensate for this, I introduced a podium system that would reward players during the debate mode for standing at it with poll points, which would be taken away from the others. Not only did this create a king-of-the-hill aspect in the gameplay, but it actively urged players to fight each other, under threat of losing popularity in a state.

Using these aspects, I defined some player metrics with my programmer and started creating an example level to show off the debate mode with the new podium added. In order to keep things interesting, I added a trapdoor under the podium that could be triggered by shooting a couple of buttons near the top of the level. The trapdoor would be on a cooldown, in order to prevent griefing between players.

The example level I designed, with player metrics and an art asset list

My team and I are presenting the new system and level to the class tomorrow. I tend to get excited whenever we have something new to show, but this is nothing compared to what I have planned for the campaign mode.