Last week I had written about how invested I was in Super PAC Bros!‘s debate mode, but when my team and I presented our progress, our professor had qualms about the progress of the rest of the game. It was said in sort of a blunt manner, but it was fair, since I felt very similar to the professor: I had left the campaign mode on the back burner for too long. I felt that this was the time to look into the finer details of political campaigning- sure enough, it gave me a plethora of inspiration.

It was inevitable that during the development process of Super PAC Bros! that I would need to do some research into the American election cycle. I had been aware, vaguely, of what a political action committee (PAC) was before; basically, it was an organization that existed to give funds to political candidates, ranging from local elections to presidential campaigns. What I hadn’t known before, however, was that PACs are legally limited as to how much they can donate to candidates, political parties, and other PACs. Prior to 2010, PACs were also limited to how much they could spend outside of these areas, and where they could raise that money from- namely, unions and corporations could not spend money from their general budgets, and could only “sponsor” PACs by covering their operating costs.

The D.C. Circuit Court case of SpeechNOW v. FEC in 2010, however, established that PACs could spend as much as they wanted, so long as it wasn’t directly involved with any political candidate or party. This came on the heels of the Supreme Court case Citizens United v. FEC, which declared that corporations both for-profit and non-profit, as well as unions, could contribute as much of their funds as they wanted to a campaign; in similar terms to the SpeechNOW case, so long as this money was not given to candidates or parties, it was now legal. A new type of PAC, dubbed a “Super PAC” by Eliza Carney while at National Journal, emerged as a logical extension of these laws: PACs could spend and raise as much money as possible from any organization, providing they weren’t donating these directly to campaigns.

There were a number of elements already in Super PAC Bros! that shared similarities here: first off, the “Super PAC Challenge” before each debate allowed players to win money from PACs for fulfilling their requests (i.e. game play challenges). During a meeting with a Game Design professor, though, he stated that “That’s not actually how Super PACs work”, which became clear after doing this research. Instead, these Financial Challenges would be re-dubbed “Corporate Interest Challenges”, and the money won would be distributed to the player’s PACs. 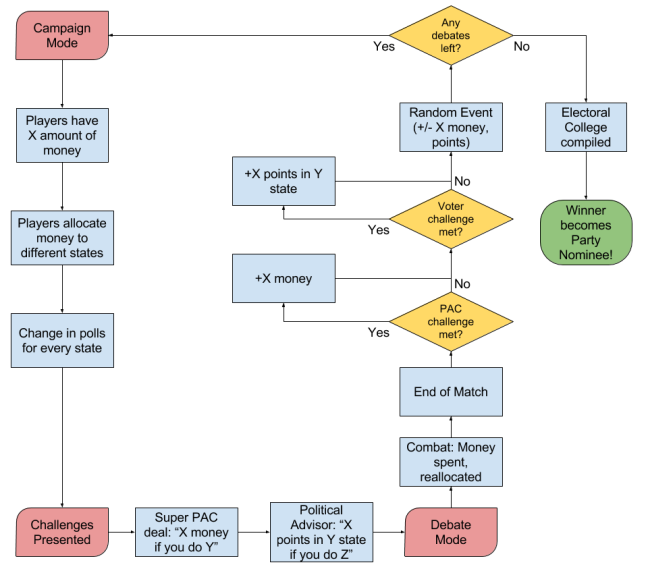 Another interesting wrinkle of election law was that Super PACs still needed to disclose their financial sources- either on a monthly or a quarterly basis. Because of this, many companies opt to not donate to these PACs until the final few weeks before an election occurs- that way, their influence is not revealed until after the public election has been held. A loophole also exists- limited liability companies (LLCs) are sometimes formed by corporations or individuals to donate money on their behalf. Since there are no limits as to how much money companies can give each other, and since LLCs do not need to disclose the identity of their owner, this creates a “proxy” by which entities can donate to PACs anonymously. In one case, D.C. politician Muriel Bowser’s campaign received $25,000 in donations from over 70 LLCs, all of them made to prevent the true source of money from being known. When forming a satirical Super PAC, Stephen Colbert created one of these “shell corporations” with the assistance of Trevor Potter, chairman of the FEC.

Disclosure laws also depend on which state the PAC is based in, and we already had a semblance of campaigning in states in order to utilize the electoral college as a system in the game. As such, it made sense to have one PAC per player per state, and to have a large amount of the strategy gameplay be centered around shuffling funds between them. 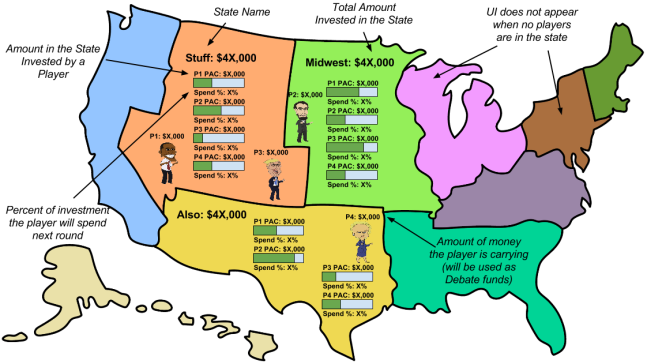 Having disclosure of funds and using LLCs to circumvent that also interested me as a system. I decided that the player would have a certain amount of turns before needing to disclose a Corporate Interest Challenge, which would make them lose poll numbers in a certain state. Alternatively, they could have these companies funnel the donations through LLCs, which would give players a chance to not lose poll numbers- if that chance failed, though, a scandal would erupt, making the player lose points in all states. 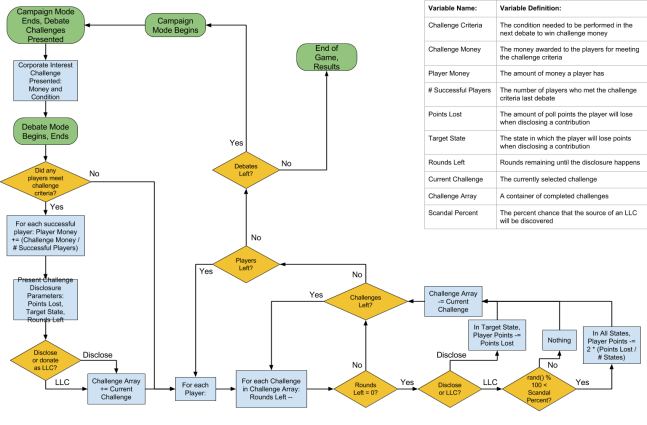 The first draft of the donation disclosure system

When going over this with my team, though, they felt that this was too punishing- when the player won, their options were to take a certain slight punishment, or to have a chance of receiving either a harsher punishment or none at all. My producer argued that this mitigated the cash reward from these challenges, and would make players less willing to try and achieve them. I didn’t necessarily agree- I felt that the player’s need for money would outweigh the small, certain punishment- but I proposed several alternatives. We agreed on having no punishment with disclosure, and filing under an LLC giving the player a chance to increase the money won, or a chance to lose all of it.

The second, less punishing draft of the donation disclosure system

There are alternate systems I devised that could work in place of PACs, as well as attack ads, which I didn’t go into detail with here. Even with only these systems added, I feel a lot better about the state of the campaign mode. Our first playtest of it is actually happening later tonight, which I’m looking forward to. Hopefully we can convince players- and the professors- that it’s a worthwhile addition.