Overview: Underworld Ascendant is a game attempting to emulate immersive sims of years past, positioning itself as a spiritual successor to Ultima Underworld. First employed as a Quality Assurance tester, I was able to suggest and even implement a few features during less intense periods of development.

After the initial game’s ship, we were fortunate enough to be given resources for a few updates. During these updates, I was more explicitly given design tasks and responsibilities, and by Update 2 going live I was given a credit for Additional Design. 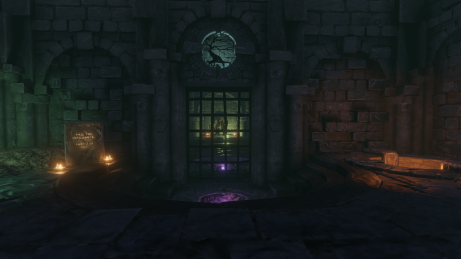 For Update 4, I was put in charge of designing and implementing five rooms to accommodate a new quest type where the player needed to rescue an imprisoned character. Intended to serve as more puzzle-like areas, I had to figure out a few interesting combinations of existing systems to leverage into engaging problems. Seeing as traps were underutilized in the base game, I focused on pushing them as tools rather than combat elements in order to accomplish a number of these.

Going over the minutiae of five of these rooms is probably too much, so I’d like to focus on what I think is the best example: the room added to the Titan’s Reach level.